Though nursing a cold, on Sunday, October 7th, I went to see “Abira and The Mountain” at the Hill School Theater.  Billed as A Place To Be’s newest family production focusing on acceptance, empathy and love, the story was Inspired by the hearts and minds of Amy Stone and Ryan Perry.   “Abira and The Mountain” tells the story of a princess in a wheelchair who finds her power by using her own challenges to help others.

The play itself was touching, humorous and as with all A Place To Be performances, delivered its message of compassion and understanding admirably. A raise of hands to show how many in attendance had never seen one of their productions, I would say at least 20% of the packed house was new!  This new musical will also tour this fall through Loudoun Country Public Schools as part of the APTB’s Same Sky Project.

So as this is The Artist’s Perspective, I would like to share my thoughts on these actors, creativity and the message delivered.  I would like to do so in the face of caustic politics, a fair amount of general unhappiness, hurricanes, earthquakes, and other such despair. So, here goes.

Playing the lead was Amy Stone. If you don’t know Amy Stone you should, and in doing so, you should see her on stage performing. You see, Amy has a fairly severe case of cerebral palsy, and while being highly reliant on others, it doesn’t stop her brain from being a pretty fearless young lady and a creative one at that. Joining Amy onstage was an ensemble cast of friends and fellow actors, each pushing through their own challenges of depression, autism, diabetes, dyslexia, down syndrome, and a wide range of other hurdles. The point I would like to make here is that the so-called bad stuff going on in the world is bothersome to us because we let it control us, get to us.  We allow it to consume us and in many cases ruin our spirit.

Imagine though, if your eyes opened in the morning and you were Amy. Imagine if before worrying about the weather, or politics, or a long list of chores, your starting point was what she faces.  Imagine if Amy could trade her life for yours.  Would she waist a second before dancing? Would she spend a moment on the couch? Would she starve her creativity or put hurdles in front of herself that really do not exist?  I bet not. She would fly with accomplishment and I know this because she already does. 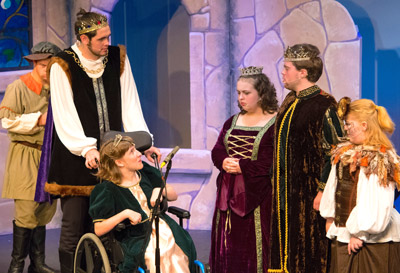 Attending an A Place To Be show is a form of reality check. Seeing these young creative minds memorize lines, take on their character and present a story as any actor would, is often way past what we think they are capable of. Do they experience anxiety and push their comfort zone? Yes, they do. They are more like each of us than you may ever know. Each of them has dreams.  Each wants to be treated with respect, and again, their starting point each morning is powerfully different than ours. Understanding we all have something, that we all have hurdles is important. But if you change your perspective, if you use your disadvantage in any advantageous way possible, you will more easily dust yourself off and get on with it. You will be in search of the positive message and not eagerly searching for despair to hold you back from moving forward.

Award-winning American author, vlogger and all-around creative type, John Michael Green has created an educational empire. He has accomplished more than is almost imaginable when it comes to especially educating youngsters on challenges. Yet he himself struggles each day of his life from obsessive-compulsive disorder.  In a recent “60 Minutes” interview, Green spoke of his challenge and how he has used it to his advantage. But just because he has done so, certainly doesn’t mean it’s been easy or without real struggle.

If you have a creative block or hurdles, whatever it may be, keep Amy and others like her in your thoughts. Ask yourself, what would they do if they were me? If she knew she was empowering anyone to be their whole self, to energize their imagination, or to be the best person they could, I think it would make her very happy.

Music Therapy - A Place to Be