Okay, I’m about to loose my mind. No really, as an artist, someone who really cares about art as a form of human ingenuity and deep creative thinking, KA-BOOM!!! my brain has had enough. But this isn’t just about me is it? No, it never is. This is about all of us and how technology touches our society as a whole. Screens have taken over our lives. There, I’ve said it. We are now completely controlled by screens and the people who make them. This all to supposedly make our lives better and more full.

Think I’ve gone mad? Well perhaps, but most certainly I’ve become angered or dismayed. Because where screens are concerned, we are hopelessly addicted, like junkies asking our dealers for more, at any cost. Think I’m kidding? Okay, here goes, and watch out, if you actually care at all about art, the ending of this story is likely going agitate you too!

In the 70’s, the father of a friend of mine was working on flat screen technology. The technology crept along and I can remember many years later seeing my first true flat panel screen television in 1998 at a Myer Emco electronics store in Maryland. It was made by Phillips and it was 13 grand! No one but a few wealthy people could take it seriously, but we all should have, because that technology has now not only taken over our lives, it’s created a major smack down on other parts of our lives as well and trust me, I’m just as addicted as anyone else.

Flat screens have become lighter, thinner and more affordable. But this technology is now everywhere from computers, to phones, pads, readers, large event displays, appliances, car dashboards, NAV’s, as well as televisions. We buy millions of televisions here annually. Ironically Myer Emco went out of business in 2010 on the boom of building a business solely on the back of selling flat panel TV’s. When the economy tanked in 2008, new home sales died and their unbalanced business dried up.

For the heck of it, just walk down the addictive smart phone and pad path with me a moment. First we all got small screen phones. Then they made bigger pads. Then they decided the pads should be smaller and the phones should get bigger and again bigger, to the point where the pads and phones weren’t so far apart, and in some cases they then re-offered smaller phones. Do you think any of us went, wait a minute, I see what you all are doing here. You want me to by more and more of these screens! No, we just kept buying them. No sooner than our noses were glued to the one we had, they would give us a glue release in the way of a new screen, bigger, or smaller, or with better resolution, that would work just long enough to re-stick our schnozes to the new one.

Our televisions however, have grown and grown. When I was a kid, a TV came in one of two varieties. It was either a heavy, tube laden box, with rabbit ears on a stand, or a huge piece of furniture. Their next phase was that box in a huge armoire. Then came those massive, crappy plasma things that people built book shelves around. Today, an entertainment armoire is a virtually worthless piece of furniture that you can’t even give away. Books and book collections and the shelves needed for them are falling by the wayside to books on E readers, and the TV can now been found where art once hung.

So what’s my beef? Coveted for centuries, with museums around the world filled with the priceless work of masters, art struggles these days to find its rightful place as the focal point of a room. There in its spot is 65” of nonstop news, sports and of course, don’t forget everyone’s reality but our own. We need to experience survival, make duck calls, go picking, see everyone’s talent, beauty pageant, dancing, dating, bachelor, bachelorette, real wife, drag race, and amazing race, all from our couches. The television now dominates not only our lives, but the space on our wall where art once hung. Where we use to have just one TV, now we have several. My point would be, imagine for a moment visiting a museum and finding it filled with televisions.

To that point, meanwhile, our last vestige of sanity was saying, that pesky TV sure looks like hell on my wall when it’s off. If only it looked better, maybe like a piece of art or something. Well here comes Samsung to save the day! That’s right ladies and gents, Samsung has heard the call and has now released, ta da, THE FRAME. It’s a TV with a low quality picture frame around the edge, which then projects art digitally shown on its screen, so you, oh savvy art lover, will be tricked into thinking it’s real art. But hit the remote and I think the rap group Tag Team said it best - Whoop!! dare it is, whoop dare it is! The magic of TV appears! 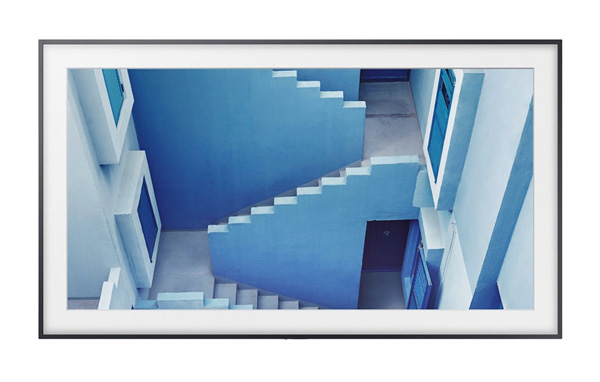 Samsung’s webpage for The Frame is all the more insulting. Its video shows savvy art lovers visiting another couple’s home filled with art and they’re surprised when they find out one of the pieces is The Frame TV. Samsung says - The most beautiful TV you’ve never seen, and other complete fabrications like - Beautiful art when your TV is off. Seriously? Art? They’re calling this art? Generations are loosing art programs and here comes Samsung to save the day by redefining art as a complete fake. Putting a frame around a TV does not make art. A digital picture of art is not art. No texture, no brush strokes, no creativity, just a cheap frame, a TV and a digital image?

So, has art become a dinosaur? Am I overreacting or has the screen finally won? I’m not TV adverse, I grew up watching TV. But it’s sad to see art gasp for its breath as the screen thrusts its mighty sword. It’s hard to watch a new generation very possibly loose sight of the need for talent creatively representing life through paintings. The television has its place in our lives, it doesn’t need to destroy art or massacre art to hold its place, but that is where this may be heading.