As we welcome fall, I continue to relish in my memories of summer. I had the privilege of spending this summer with family and dear friends in Greece. As a first-generation Greek-American, my early memories of summer are in the crystal clear blue waters of Greek beaches.

For most of my American friends, these are the typical images conjured up when thinking of Greece. The sights are amazing, but I’ve recently found myself trying to convey how time feels when I’m in Greece. The people of Greece seem to have a very different relationship with time. Yes, it’s a vacation for me and I know vacations tend to have their own slower pace, but there is something specific to being among Greeks in Greece. 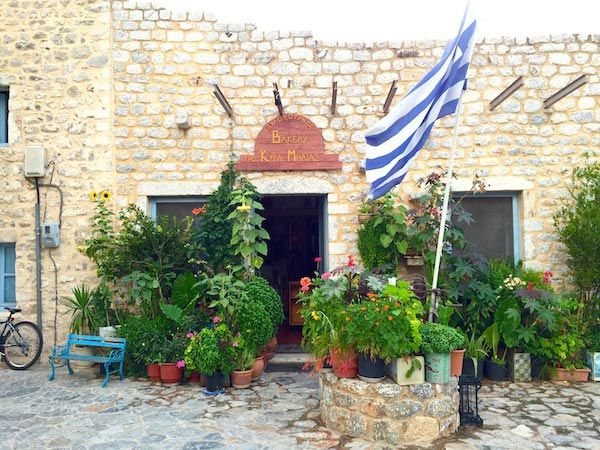 Around 6pm on a Tuesday afternoon in August, we stopped in the town of Areopoli on our way back to Sparti as we returned from a day on the Mani coastline. All points are situated in the southern Peloponnese of the mainland of Greece. The town of Areopoli is named after Ares, the god of war, for its pinnacle role in the Greek war for independence in the early 1800s following 350 years of Turkish occupation. The name is fitting and apparent in the architecture marked by fortified buildings with small windows, towers, and substantial cobblestone pathways. 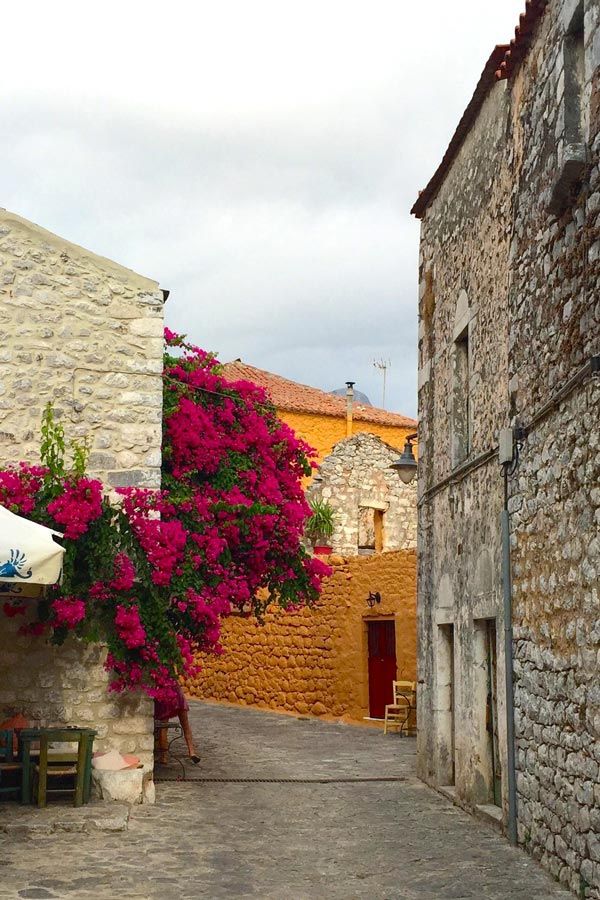 We parked on the outskirts of this historic town, and began a quiet stroll through the town’s center. What was most apparent initially was the scarcity of people. Did you know Greeks nap? Really...all of them...every day. The entire culture embodies midday naps as a priority to the degree that most businesses and retail close between the hours of 2pm and 6pm. There’s a psychic and energetic pause that occurs during these midday hours. There is a sense of “cleansing” as the residue of the morning has time to dissipate – the chores, the work, the social interactions...even if all positive, it’s so nice to have a space in time that allows the stimulation of the morning to dwindle.

As we were arriving and taking our stroll, the town was just beginning to awaken from its midday slumber. There’s a very powerful “reboot” that this second awakening permits and it’s palpable, even on days when I’d not personally napped. On the heels of a restorative pause, the energy of the evening is light and positive, not agitated and overextended. While Americans tend to come home around 5pm to 6pm exhausted and running on fumes, the Greeks are just getting going with a skip in their step!

As we passed restaurants, store fronts, and even the bakery, individuals were in the mindful flow of tending to their spaces with care and respect. The chores of sweeping, watering, and cleaning seemed to be the ritualistic way to prepare for and greet the evening. All along my walk, I noticed a cherishing and reverence of old material possessions and structures that’s not so typical in American culture. For Americans, when something is broken, the quick inclination is to replace it. In Greece, there’s a willingness to take the time to care for buildings and possessions, gardens and flowers. It’s fairly typical to see broken items still in use or repurposed, as opposed to discarded. In American culture, that may be considered shabby chic; in Greece, this is a deeply engrained way of relating to their possessions, an endeavor that takes willingness and time. 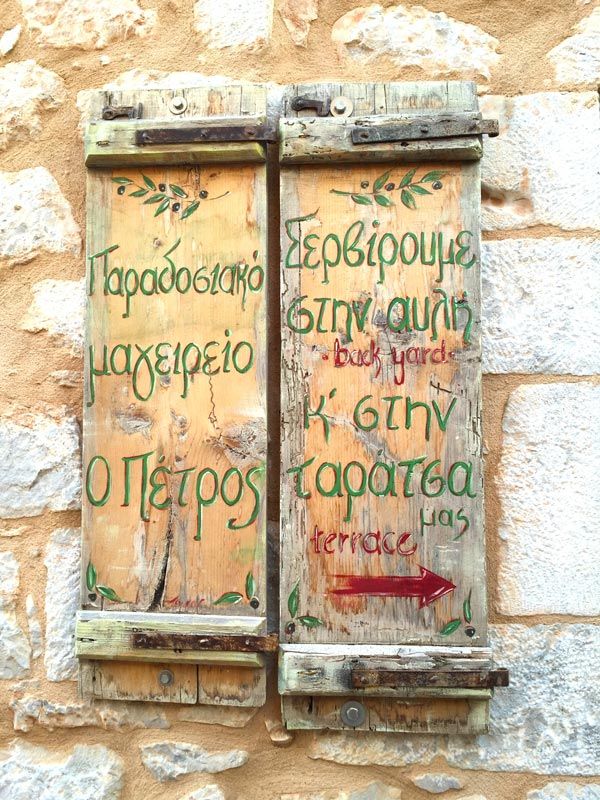 In admiring the buildings in Areopoli, I was able to time travel if only for a moment. The strength of stone, the monochromatic coloring of the facades, the small doors and windows were all reminders that the fundamental priority for people of Areopoli in years past was their safety and security. And yet the current citizens, safe from war, cherish these buildings and take time to make them their own. While the functionality of the buildings may not be perfectly suited to the new use (like the church that’s now a tavern), there’s an apparent incorporation of respect for the past and flexibility in the present. 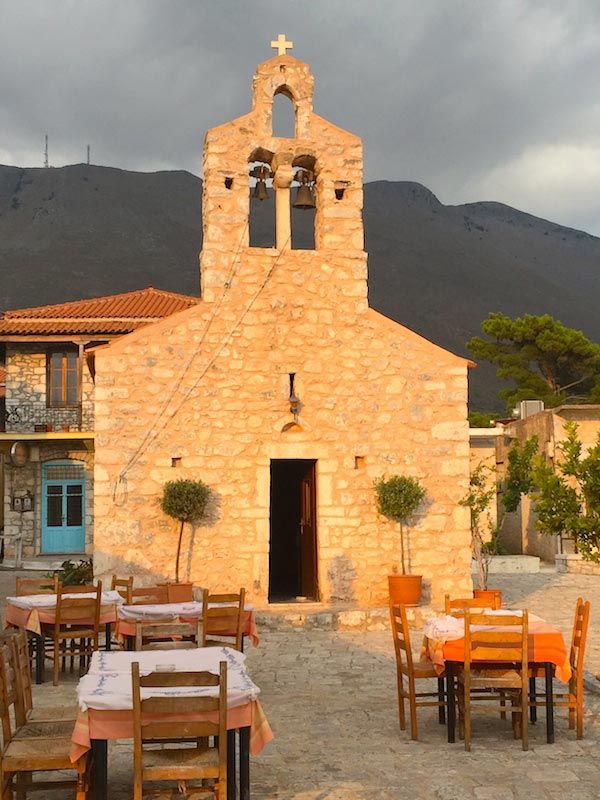 My errant thoughts on my walk then flashed back even further. Perhaps there is importance in noting that, by Greek standards, the buildings in Areopoli from the late 1700s to early 1800s are new when compared with something like the Parthenon that dates back to 432BC. Living among such buildings and history must do something fundamental to the Greek psyche. Nearly the entire country is an archeological dig situated around one of the wonders of ancient history.

“Is that the key?” I wonder. For Greeks, their history is millennium. In comparison, America as a country is in its infancy. While some Americans live among structures from colonial times, that’s our point of birth. The Greek civilization had been established for thousands of years by then. How might this impact a culture’s perspective of time? It left me wondering if, as a people, this is why Greeks might not be quickly “frazzled” by something like the current economic crisis.

Our vacation started right after the eruption of the financial catastrophe that led to cash flow restrictions of €50 per Greek citizen per day. The American media portrayed, with its catastrophic nature, social upheaval and dramatic images. While I’m sure there were kernels of truth to the struggles depicted, it did not AT ALL match the tone and energy of the Greek people or culture when I arrived and traveled on Greek soil. What I witnessed, and what I’ve always loved about my Greek roots, is a “this too shall pass” attitude. As a people, they’ve been invaded, enslaved, occupied, and come out the other side across the millennia.

So they keep moving forward...for now, on €50 a day...all while taking time to cherish their moments and tend to their relationships and belongings. They continue to awaken from their midday slumber and sip a coffee with friends at outdoor tables under the backdrop of tended flowers, store fronts, and ancient buildings. So I follow their lead. About an hour has passed on my stroll and there is a bit more energy in the air, more life on the sidewalks, all as the sun is on its downswing toward the horizon. The vacant colorful tables of outdoor cafes begin to fill as the flowers catch the light of the setting sun. And as the music plays in the background, I take a seat, order my coffee and greet the evening with thoughts about time on my mind. 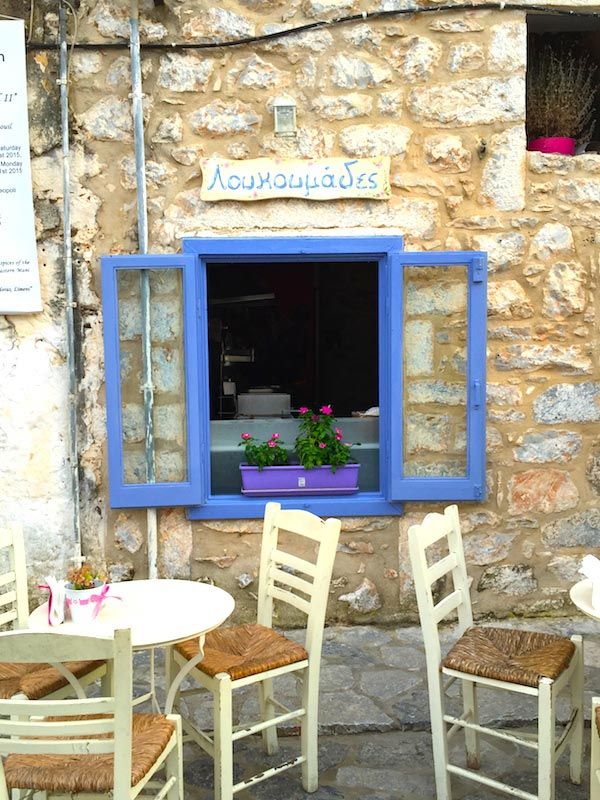