The Campaign to Change the Sloth’s Name 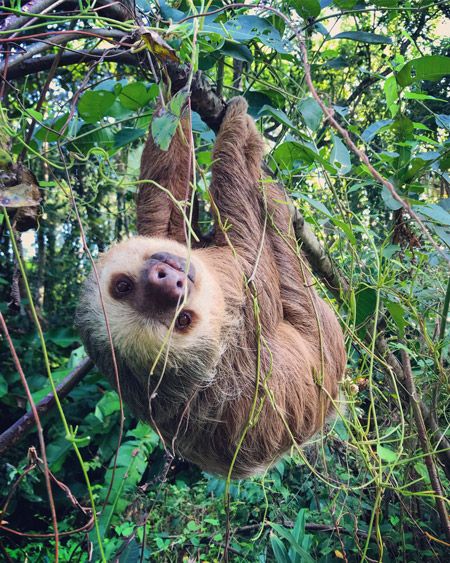 Take a look at the picture. Study it very carefully. There is a lot of beauty, perspective, and wisdom to glean from this photo. A peaceful creature living the life he was meant to live. Doing exactly what he is supposed to do.

This, my friends, is an ever-so-lovely sloth.

I’ve spent the past month living in the tropical gift of a country known as Costa Rica. While I’m primarily a volunteer here, I recently took a quick trip to the beach town of Puerto Viejo. Nestled along the Caribbean coast, Puerto Viejo offers placid shoreline, quality coffee, and awe-inspiring nature. The first morning there is where these last two components converged.

I walked along the road to visit one of the well-known java spots, when I came upon two comfy sloths, just hanging out amidst the jungle as cars and bikes went by.

Now, sloths are common in Costa Rica, no doubt about it. It’s not an accident a sloth is on one of their currency bills and is pretty much the country’s mascot (along with the toucan). But, one doesn’t typically just pass on the road a sloth within petting distance. Many times they’re way up in a tree, difficult to spot to the untrained eye, and those sightings might be in a national park. However, I found myself able to give these new pals a hug, and perhaps would have tried, had it not been for the warning I’d received that these cuddly creatures bite (with a lot of strength, albeit slowly).

So, I was able to snap this close-up of this feller. And after this encounter, I thought a lot about sloths. Particularly, their name.

I think it’s time for an update. A name change.

You see, we use the term “sloth”, which basically means lazy. To me, lazy denotes wasting time, evading responsibility, loafing around without purpose.

When we say we’re lazy, it’s because we think we should be doing something else. In other words, our laziness exists not because of what we do, but because of what we don’t do. For instance, there’s a difference between sleeping in on the weekend to get some extra rest and sleeping in every day to avoid facing the tasks that await us. One action contributes to purpose, the other inaction runs away from it.

Tell me, what else should sloths be doing? What are sloths avoiding? What purpose are sloths running (crawling) away from?

So, they’re slow and still a lot. Whoop dee doo. Would you call a tree lazy?

Sloths move about their world and contribute to the rhythm of the rainforest in their own unique way; this includes providing a home for other organisms in their thick hair. And they bring joy to those lucky passersby who cross their path.

And they inspire blog posts.

They simply, and rather perfectly, play their part in the circle of life.

Doesn’t sound lazy to me.

So, if not “sloth”, what’s a good name for these lovable animals?

My fiancée Katie had a great suggestion. The slogan and one of the main sayings here in Costa Rica are “Pura Vida”, which means pure life. It more or less means “go with the flow”. Maybe “take it easy” or “hang loose” would be pretty good English equivalents.

Katie thought “Puravida” would be a good name for the sloth. I dig it. It takes away the accusation that they’re living in one of the seven deadly sins, seems more apt to their personality (do you see that little smile in the photo above as the dude just goes about his existence?), and connects them to Costa Rica, one of their main havens in the world.

Here’s hoping this blog post gets a million shares and kickstarts a campaign to change their name to “Puravida”.

But, even if it doesn’t (fingers crossed!), sloths won’t care...they’ll just go on living their chill lives, purposefully enriching the planet in the slow way only sloths can.

Exiting the Sphere of Envy

The Wizard of Waynesfield