One Ear To Hear

I’m on way to Bloomington, Indiana, my 1994 Mazda Protege DX filled with gear and normal luggage, cruising along when all of a sudden my car momentarily shuts off and the check engine light pops on. Stupefied, a moment later the car wakes back up. Ominous?

I arrive at the restaurant/bar I’m scheduled to play in, the name of which I honestly can’t remember. And, that’s a-okay by me…happy to forget the details of this evening. It’s a Monday night in a college town, and I’m slated to bring some entertainment.

I arrive and tell the hostess, “Hey, I’m Matt, I’m the musician for the night. Where should I set up?” I get a confused look back at me as she says, “Oh! Okay…yeah. Let me check on that.”

She heads to the bar to talk to her co-worker, and not long after my cell phone buzzes. One of the owners, who booked me for the gig, gives me a call. He apologizes, saying that he messed up and booked an independent film screening in the back room this same evening and that they’re going to set me up in the front corner to play.

That’s the first stop on my way to Background Music Land.

Remember when I said it’s a Monday? Well, it’s not just a Monday…it’s Monday Night Football Monday. In a college town.

I’ll spare you the two hours where I sang to (or, better said, in the vicinity of) mostly people focused on the end zone and their burgers, or those passing by on their way to watch the indie flick in the back room. I ended up at least turning the gig into a night of practice, where I sat in the corner and played nine-minute blues jams. Honestly, whether I played Row Row Row Your Boat or Bach’s Toccata and Fugue in D Minor, it wouldn’t have made a difference to this crowd.

I ate my meal, finished the gig, got paid, and drove off without looking back, putting “I’d like to forget this ever happened” into my GPS.  A couple more check engine light stutters rounded out the night.

I write all of this to give an example of a tough gig. Notice, I haven’t used the word “concert” or “show”. My music was very clearly a supplementary component of the night, and the vast majority of those in the place weren’t present for my music.

Sometimes it’s fine to just contribute to the environment, perhaps at a winery or a restaurant, and help others enjoy their evening.

But, even in these instances, I’m hopeful and appreciative that there is some attention, kindness, and acknowledgment. And, I will say, I prefer these kinds of gigs to be in the far minority of my touring (maybe one for every dozen actual concerts?)

Now, let me shift to the greener side of gigs: where people listen.

Where performer and audience alike are aligned, and an experience occurs.

This is a magical thing.

I’ve played many house concerts in my career. The term is as it seems - a concert in somebody’s home. People gather to hear the performer in an unencumbered environment, free of distraction. Stories are told, songs are sung, connections are made, and moments happen. And every experience is unique. I had a concert in Flensburg, Germany where I played in socks on a wooden floor and reverberated in an exquisitely acoustic living room to a locked in and truly sweet audience of about twenty. I had a magical Summer evening on a porch in Oconomowoc, Wisconsin playing to over 300 gracious people there to experience the music. And I’ve played intimate concerts to about twelve people that wanted to escape reality, or rather, go deeper in it. The number of audience members didn’t matter. The presence did.

House concerts are great like this in that they have focus in their DNA. They are pretty much designed for listening.

Certain venues can, of course, be home to this magic. Some of my favorite experiences as a performer were when I opened for Joan Armatrading. Beautiful venues in Northern California, filled with hundreds of people listening.

But, had they been on their phones, or talking about their plans for tomorrow, had it been hundreds of people in the room but not in the concert, I’d happily trade 300 for ten interested attendees in somebody’s living room.

And there’s the truth. If there is even one ear present, taking in the music, being impacted in some tiny way, it’s worth it. It’s worth the music traveling through the atmosphere and to that individual.

And in that distracted, indifferent bar in Bloomington, there were a few people that smiled and tipped me on their way out. They were kind, and I’d like to think had their evening enriched by my voice and guitar.

For their ears, I’m grateful and glad I played that gig that night.

In the Midst of the Metamorphosis

The Wizard of Waynesfield 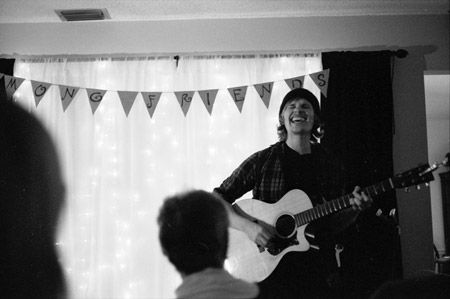