To paraphrase Elizabeth Gilbert in her book, Big Magic, inspiration is the tingly, stomach dropping, arm chilling, full body experience that calls to you. Inspiration is what happens when that physical response lights you up like a neon sign pointing you (often pulling you) in a direction that begs further exploration. Inspiration is the prelude to an idea.

That is how my process with choreography worked as well. Over the years people asked me what came first, how do you create choreography for dance? The answer: inspiration that leads to an idea that finds expression in movement. For me, inspiration often came tapping on my shoulder when I learned about a new culture or ritual, or from studying how human beings connect and disconnect from each other. It also often came from hearing a piece of music that pulled at my muscles, imploring them to dance. Some people gain inspiration from the dancers themselves, their muses, or from the space that they are creating in or for. Legendary choreography expert Twyla Tharp wrote about expanding her movement vocabulary by going into the studio and tying some of her limbs to each other (ex. tying one arm against her body so she couldn’t use it) in order to create something new in choreography. No matter in what form, at some point inspiration to discover something comes tapping on your shoulder, beckoning your attention as if to say, “Follow me, I have an idea.” The key for us all is to be open to hearing the call and saying, “yes.” In my case, that has ended in choreography, but it's different for everyone.

How Inspiration Leads to Choreography

Choreography From a Library

I once was responsible for the choreography of a piece after reading a random book that had fallen off a shelf in the public library. I was standing in the aisle a section or two away when I heard a thump and I looked over and this book was lying on the ground. No one else was around. We could speculate a lot of reasons why that happened (and yes, I’m into the supernatural options too), but needless to say I just assumed I was meant to read the book. It turned out to be about a disabled, homeless child in India with no legs who used a skateboard to get around and beg for money. (Who knew that years later I would be directing a non-profit that works with people with disabilities and that my work would even take me to India to help children with disabilities there! Coincidence? Inspiration?). The story captivated me and took my breath away. It led me to an Indian dance school to study the basics of Indian classical dance that I then integrated with modern dance to create my response—in the form of choreography, of course—to this profound story of desperation and resiliency. 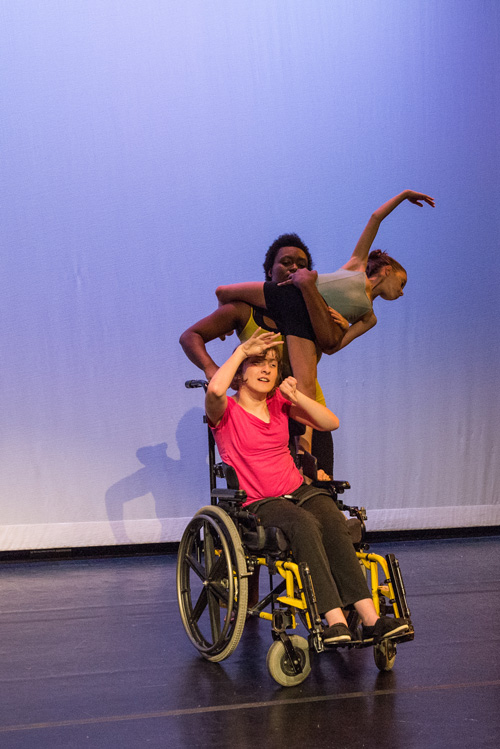 My favorite inspiration for a piece of choreography also came unexpectedly (the best always do!). For years I had toyed with creating a work relating to the Holocaust but I didn’t know what I had to say or why it kept calling to me. There were many other works of choreography already out there on the subject, why did the thought keep lingering for me to do another one? Years went by and it continued until one day I went to the National Holocaust Museum in Washington DC. I had been there before but for some reason I woke up that day, grabbed a notebook and went again without knowing why (inspiration was at work of course!). I strolled around the museum, sat for a while at different benches, observed people and was just getting ready to go when I felt pulled to head downstairs to the bottom floor. Off I went but there was just an empty theater and a bunch of empty walls. As I started to turn back suddenly those hairs on my neck were sticking up and well, of course I had to keep going! I felt like Scooby Doo following the waft of Scooby snacks. In a small, dimly lit side room I found a pile of photos lying on the floor, some face up, some under sheets, etc. It was in seeming disarray with no intentional organization to the piles. I was just about to leave disappointed, when I saw them. I will never know if they were meant to be hung this way together or if they were there just for me to find, but in one corner were 3 photos that made my hair prick up so hard it practically hurt. They were almost identical: a little boy with his hands behind his head execution style, Nazis with their guns pointed right at him; a little girl in Rwanda, her hands up, a mass grave in front of her as she’s about to be shot; a little boy in Kosovo, a uniformed man about to club him. I felt immediately sick and excited all at once. Suddenly I recalled the quote, “if you forget the past, you are condemned to repeat it.” This was it! I knew then that I was to create a dance with choreography that helped us remember our humanity; that before they became photos on a wall symbolizing destruction and war, these victims (and perpetrators) were all just people living normal lives. Just then a security guard found me and I was chased away pretty quickly but the images were blazoned across my mind. The piece, “Witness,” would go on to win choreography awards and be set on other companies as well. Who knew? Inspiration did and I am grateful I said yes!

To describe how one actually creates choreography itself is a bit harder to explain. Movement has a vocabulary just like all languages do. Some movements may be staccato, others filled with swings or sweeping motions; some might be floor bound others slice across the entire space; some moments call for stillness. Stillness may represent a period, comma, ellipsis, previous circumstances, the beginning or the end. The dance space itself, the canvas of choreography, has aesthetic lines. For example, there are directional angles on stage that are stronger than others (if you travel from the upstage left corner to downstage right, it’s considered the strongest angle on a stage), and matching choreography to those makes bigger statements. Much like metaphors and analogies are tools for writers, there are also tools for phrasing choreography with which one can play. After creating the initial movement phrase (the theme), someone working in choreography might try a variation (making a slight change to the original phrase), inversion (doing the movement upside down), retrograde (doing the phrase backwards like in rewind), reversal (doing the movements in the reverse order), canon (setting the movement to start at different counts for different dancers), etc.

In the end, no matter how anyone who does choreography goes about their process of creation, at the edge of what words convey, dance takes over. Dance is a portal to emotions, to new frontiers, to processing events and to depicting them. As Martha Graham, a world-renowned choreography expert, said, “Dance is the song of the body.”

Jump Start! FIVE Inspirational Things You Can Do Today

Signs of Inspiration are Everywhere 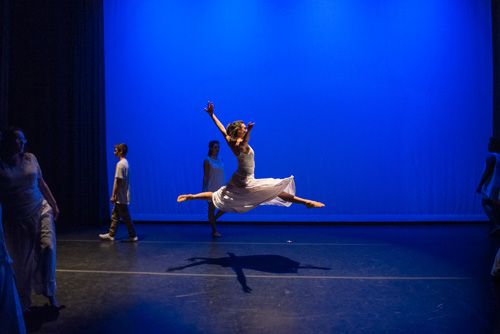