My brother Dave picked a great time to retire. At the end of 2019, he said bye, bye to a 45-year career in trade of staying home, relaxing and then this!!!!!!!! Oh brother, is his timing interesting.

On the one hand, it was perfect for social distancing. On the other hand, he can be a bit like a big cat in a little cage when it comes to just being around the house. He’s not a bookworm, he’s more of a doer. But even with going at his honey-do list and projects, boredom can set in quickly. In steps creativity to save the day.

After picking up photography again, new images are being born weekly if not daily. But then a text reveals something new using the oven. Though very nostalgic for the 50s, no he didn’t dig out an old Betty Crocker cookbook from his antique store exclusions, instead he, apparently prompted by his wife Angie, hand-painted glass. Go figure. Turns out Angie purchased the kit a year ago but the kit didn’t apparently come with the motivation to get started. Tee hee!

So, is this out of the blue? Well, out of the “blues” maybe. But maybe more being pushed to the brink! David has really always been creative since he was young. Being his younger brother though, I have to kid and say, as long as he doesn’t get frustrated! Too funny. But really, I think both of their inner artists are flexing their muscles. Time on your hands is a funny thing, as is life. Under the burdens of work, Americans often suppress creativity and become staved, often without even knowing it. In their starvation stress builds which is not a good thing. This happens in favor of job productivity, responsibility, and sometimes our desire to climb the ladder. It can become something we have a hard time turning off. But with both of them no longer working, and now sequestered, ah-ha, creativity pokes its head in the room and says, “What-cha guys doing? Anyone want to have some fun?” So, fun is what they had.

That's when the juices got flowing and their inner artist busts out and they started painting glass. Yup, then the two of them put something in the oven and hey, it wasn’t a new baby! Enamel paint, and just 30 minutes at 350F. Here are some examples! Get going you social distance-ers! It’s time to have fun! 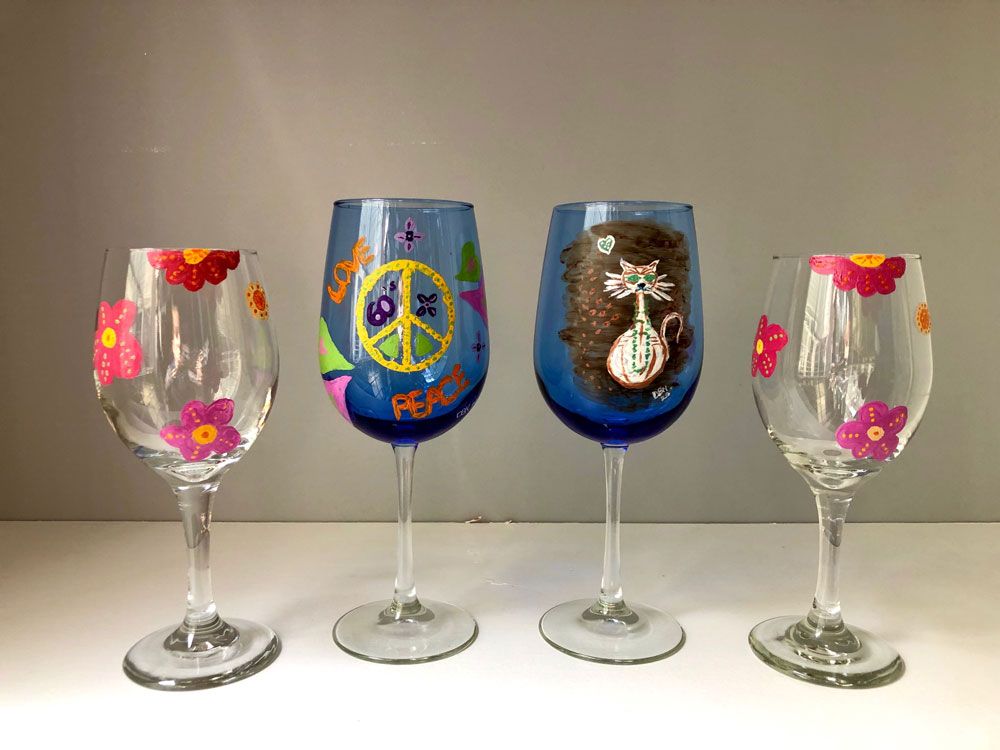