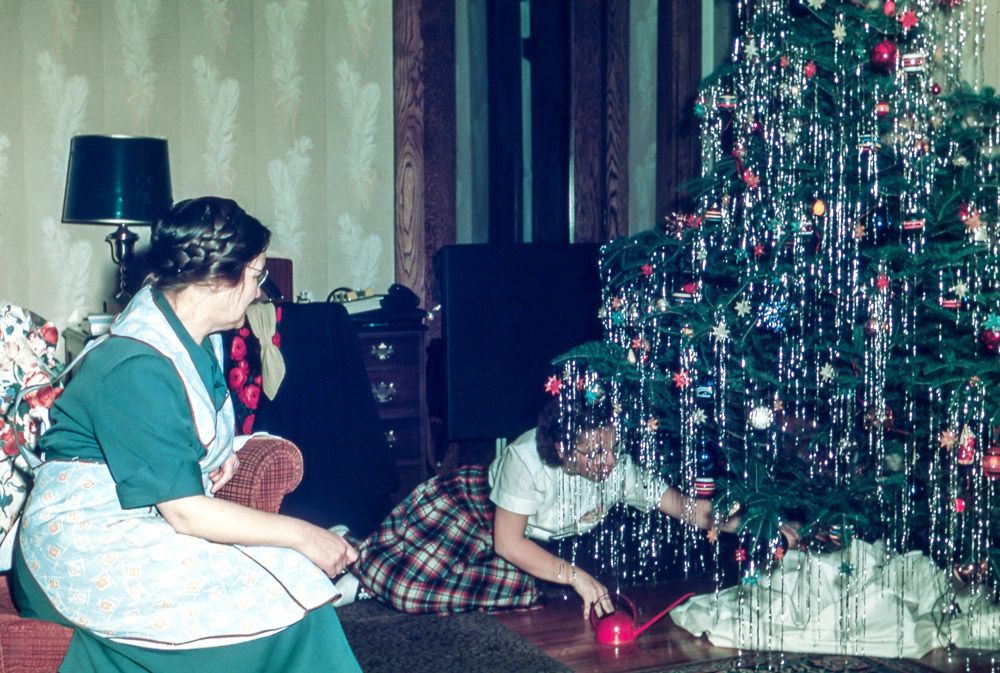 I can remember as a young boy growing up in the 50s and 60s, my brother and I being schooled by my very artful mother with her lessons on decorating our Christmas tree. She was dutifully precise in her approach. Nothing about decorating was to be done willy-nilly, or at break-neck speed.

Once the tree was in place and straighten, it would stand there as naked as in the forest and await its heavy wired lights, with large screw-in bulbs that were used back in the day. The process of draping them around the tree and getting them just right was quite a process in and of itself.

Next, the tops would come off the ornaments boxes. There were no boxes simply filled with a dozen or more of plain red, gold, or green ones, purchased in a quantitative fashion. My memory has each handmade Santa, angel, bugle, snowman, pinecone, acorn, toy solider, star, bird, bell, basket, and snow-covered cottage, being individually and carefully wrapped in tissue. We were to handle them as if they were not only thinly made of glass, but precious and one of a kind. Like many ornaments of the day, they had likely already made their long trip from Poland or Germany. Therefore, once the unique, glittering gem was in your hand, its placement was not vapid. I can recall pointy pine needles making the task some years less fun than others. “Ouch” did not enhance the verse of any Christmas carol!

Despite our best efforts, ornaments did suffer injury. Along with glitter loss, often the tops of them, where the glass funneled up to receive its cap and hook, would break. But they would solider on. Speaking of which, dealing with those boxes of little hooks was something. There was also the tiny looped wire piece that had to be squeezed together to slip down into the ornament itself. This, of course, is where previously mentioned damage to the ornament may have left a jagged edge just waiting to pierce little fingers. Oh, the perils of youthful decorating.

In our inventory were also strings of tiny multi-colored, glass beaded garlands, which were never long enough to make a good loop of the tree, while best efforts were made. There were also some twisted glass icicles, which were usually hung off the lower branches. Our topper was one of those elaborate indented pieces, with a couple of silver and gold glass balls atop each other and a final long stem that seemed as if it would touch the ceiling. Long and fragile, it was off-limits to my little hands. I lacked the reach to make use of it anyway.

Once the ornaments were placed where the lights would make them come alive, it was time for tinsel. Oh, my dear mother and her tinsel. As precise as the ornament positioning was, nothing compared to her methodical approach to the enduring single strand placement of tinsel. Left to my own seven-year-old self, handfuls would have been thrown as snowballs at the tree, leaving lumps of the shinny thin metal deposited hither, thither, and yon. Instead, a small untangled amount was taken from the box and laid across your hand. Then from your hand, one piece would be selected. A single branch would be chosen to place the single piece of tinsel on. Age kept me to the lower ones, and hypnotic drowsiness would come over me with time. Or maybe it was kid-like energy being crushed by a lack of appreciation for the final result.

If I only knew then what I know today. Because little did I know that my creative mother was teaching me artfulness. She was giving me the best gift of all, which was not found under the tree on Christmas morning but adorned by our efforts in decorating the tree. She was not only teaching me the spirit of Christmas. She was teaching me the spirit of creativity. While she was very detail-oriented in her process, it was more about finding a creative rhythm and a desire for your result to have meaning. Decorating the tree wasn’t something to just get done like a chore. Her tree was to be a representation of peace, grace, and beauty. She treated decorating a tree as an art form. The completed tree brought her a sense of fulfillment and joy. Come to think of it, for me too. It sparkled, glistened, and glowed. It was festive, filled with narration and story.

I can recall us visiting my Aunt and Uncle, who had the first artificial tree I’d ever seen. It was all silver. I suppose making a snazzy effort to represent snow. Ornaments were sparse, and they had a light with a motorized tri-colored lens attached, which would illuminate the metallic tree in alternate colors of green, red, and blue. You could hear the little motor slowly wind as the colors would change. Interesting at first and then I think a synthetic feeling would come over me. Alas, while it was artful, it seemed commercial, lacking in the effort we had given our tree. Let’s just say that it was easy to put forth more attention to the presents bearing my name under the tree, than to the tree itself. But in the years to come, it was the appreciation my mother had given me for artful things that advanced the fruitful beginnings of my last 31 years as an artist and writer. Best of all, too, my desire to completely live an artful life.

We find traditional times during the year to festively decorate our homes when I believe we should internally live festively and decorate our lives throughout the year. Creativity is not only a human right; it is a human virtue. It is not gifted to some and robbed from others. All humans can realize an inner spirit of artfulness. Like anything else, be it a vocation, a hobby, an instrument, or language; your artfulness simply requires practice. Be not fearful in approaching and grasping it because creativity does not bite. It will, however, bring you an appetite for life and teach wonderful lessons about yourself and the world around you. Creativity is complete mental freedom. Be the joyful child in your approach. Find your rhythm. Be at peace, breathe, and allow your resolution to be the observation of beautiful things and the enjoyment of a clever life.

Read my Blog every Tuesday!