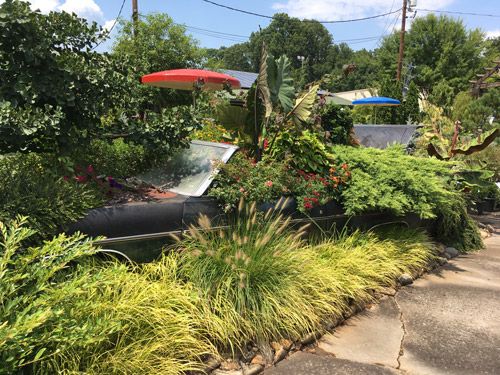 Old car repurposed as a planter at Southern Roots Garden Center, Belmont, NC
Linda and I recently met with a plant nursery owner about purchasing and further landscaping our property. I consider landscaping and levels of gardening or garden design, as a form of artistry, because it does take a developed skill, originality, use of color, texture, placement, and light. But there’s a spin to this story I’ll share in a moment.


Back to the plant portion of this post for just a moment. Not everyone who delves into this type of work treats landscaping as an artistic skill Part of the reason is simple, because they don’t consider themselves as such. In not acting the part they are just bodies in motion doing a task. A person with a shovel doing a job. An analogy might be the difference between a waiter or waitress taking ten dollar breakfast orders at a diner, compared to the person who has chosen to be a skilled professional. In the process, they have honed their service skill and are taking $400 dollar orders at a fine 5-star restaurant instead of humping grits and bacon. Both may earn gratuities of 20%, but one has a job and the other takes true pride in not only what they do, but what they serve, who they serve, and the establishment they serve it in.

Landscaping and gardening become an art form when not only knowledge of plants grows, but also plants become a medium, and the desire to see where things are planted as your canvas. More demanding than paints, plants also evolve and mature over time and through seasons. So the medium is ever-changing, it doesn’t just dry and remains stationary. The artistry then of the garden designer or gardener, is being able to see what the future brings before you bring the plants. By the way, it’s not only being able to see the future, its actually caring about it too! People who buy and put new plants on their property are simply caretakers. No one owns a property forever, and we as humans are not forever, nor is the plant for that matter. But caring that a tree will outgrow its placement, just as the owner may move on, should not only be a garden designer’s responsibility, it should be their passion for the living things they work with.

Back to my mention of a spin to this story. Our garden center owner, also named Thomas, is a full-of-life type guy, and his garden center/nursery reflects his personality to a tee. He’s fun and he goes about making his place feel that way, not only for his customers but for himself and his wife who works with him. In doing so Thomas takes the narrative of his establishment and delivers his message or messages I should say, with hand-drawn, chalk caricatures. In other words, he lets whimsical versions to the likes of Elvis and Mick Jagger do his taking for him.

He’s good at it and his comment to me was; “I’m not an artist, but I love doing it.” Well, I completely disagreed and I told him so. No, maybe Thomas is not a refined professional artist, but saying he’s not an artist is simply not knowing or accepting what an artist is. In this case, his life reflects his artistry and where I think some might not completely earn the title or adopt it in a marketing sense of themselves a bit too soon, this title of artist is earned. I call them like I see them!