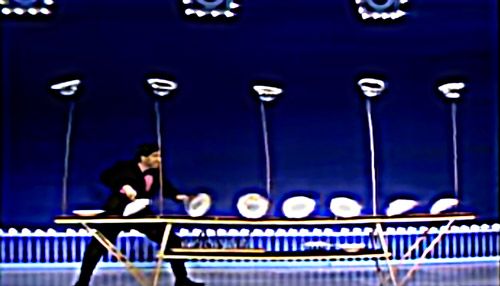 When I was a boy a real treat was watching the Ed Sullivan Show. For those too young to remember, Ed Sullivan had a very popular variety show. The closest thing we have to variety shows today would be something like America’s Got Talent. But during the 1950s and 60s, and even into the 70s, variety shows were very popular. One by one, Ed Sullivan would introduce his next act by saying, “And now ladies and gentleman…” and the next act would appear.

Probably the most famous act that came out of Ed’s mouth and to his stage was when he said “The Beatles!!!”

Mr. Sullivan had many acts for his show, which also often presented itself like a talent show. Comedians to ventriloquists, acrobatics to puppets, all were entertaining. One I remember loving though, which you can, of course, see on YouTube, was the plate spinning of Erich Brenn. Mr. Brenn, dressed in a tuxedo no-less, would frantically run back and forth during his act of having a half dozen plates or more, both spinning on long vertical sticks and some more on the table below spinning on their ends. He would do all of this while accomplishing other tricks during the process. One would wobble and he would run to its aide, get it going again and then run to another. Whew!

Life, especially one of a creative type, can be much like plate spinning. Erich Brenn’s talent was entertaining, but it was also a creative one which demonstrated his skill. Being a painter, musician, dancer, actor, or writer is no different. Working artists take that which they love doing and often turn to it as a form of income in the way of it being entertaining to an audience, even if it happens to be an audience of one. In doing so the plate spinning begins. One plate may represent you as an artist, the next as a salesperson, while two more possibly as a framer and bookkeeper, and another as a marketing director.

There you are, running back and forth trying to keep all of your plates spinning while keeping your creative juices flowing and the entertainment value elevated. One wiggly plate prompts immediate action, while another isn’t far behind. When Erich Brenn does it you can tell he’s focused on not failing, but he seemed to be having fun too, and therein lies the secret. Making sure that there is some element of fun to it all and if not, it’s time to hire someone to help you spin your plates. As it is, Mr. Brenn probably wouldn’t want an assistant, but you might.

Begin by asking yourself the obvious. Do each of these plates in a constant state of spinning really net me the results I need for the effort it takes to tend to them? If so, with each plate, ask if possibly someone else, as in your spouse, a friend, or another company, should be spinning this particular plate. Case in point, maybe you should hire a framer to frame or a marketing company to promote your work. The deeper question is it better for you to do something poorly rather than having someone else do it well at a cost?

In the end, Erich Brenn takes his bow, his act is only 4 minutes long. You though are choosing to Live An Artful Life, which hopefully will have you spinning those plate a long, long, time.