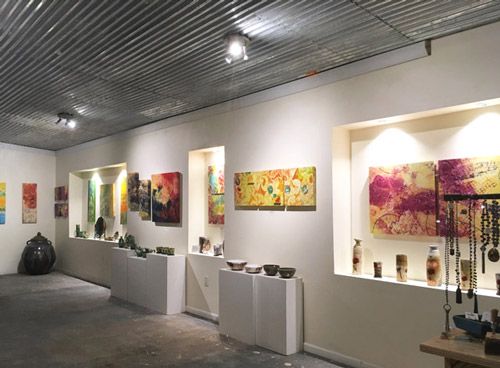 A funny thing happened on the way to the show. Back in July, Linda and I visited Leesburg, Virginia for the town’s First Friday festivities. It was a mob scene, with crowds of visitors, live music everywhere, impossible parking and much to see.

During our visit, we dropped into Cooley Gallery, owned by ex-Redskin player, Chris Cooley. In the most casual manner, I got speaking with Dana, the gallery director, and one thing led to another both my wife Linda and I became part of the gallery’s list of artists.

With Linda having founded Leesburg’s first art gallery and me having started my painting career there 30 years ago, it was a homecoming of sorts and a story quickly followed about this in LeesburgNow. In the process, it was decided that Linda would have a show opening featuring her work at the next first Friday in August. That day came, as did the rain and thus, far fewer people, but a couple of sold pieces made their way into new homes.

So, you might imagine our surprise a week later to find that Dana was gone and in short, the Cooleys would be closing the gallery. The Cooleys invited the artists in and were quite honest that the gallery wasn’t doing all that well and it wasn’t the direction they wanted to go in anymore. Surprise? Not really. Art galleries are a business and businesses take passion, hard work, and profit. Even non-profits take profit, they just don’t pay tax on it.

What was interesting, was this same exact thing had happened with me just a year ago at a gallery in McLean. Art goes in, and a week later the gallery director was let go and news came that the gallery was closing. The only surprising thing in both cases is that we all know this was not an immediate decision, yet the powers that be allowed the directors to take on the work of new artists. I get it though, the closing part. The art business is struggling to find new young buyers as the older generations slow.

Artists are about creativity and it’s time to be more creative than ever. Creative not only in your artistic sense but with your business sense as well. There are still supportive art lovers and they are looking for you. Make sure they can find you!!