As one might imagine, in thirty years of painting commissions for clients, a few might be what we would call - celebrities. All of my clients are important to me, and all have certainly been important and/or notable to someone. But a celebrity is usually one who has a constant audience. They walk into a room with an almost pre announced presence. One where most know who they are and their name, while they might not know anyone’s name. Weird isn’t it?

I’ve come to know that celebrities are just like anyone else, and yet different too, and they know it. Some rustle with their celebrity, trying to find some level of normalcy, while others revel in what they have made themselves through either sports, acting, a talent such as cooking, wealth and even politics. With celebrity, comes fame or being famous. They carry and are certainly treated then with a VIP status and should you work with one there are some reasonable things to know.

I’ll name a few celebrities I have worked with over the years and try to share what my time with them was like, or in some cases continues to be. As I don’t want this to be a name dropping session, I’ll keep the list short. Here goes, Paul Newman, Jack Nicklaus, Patrick O’Connell.  Acting, sports, chef, all celebrities, all from different worlds, one is no longer with us and so then, can honestly be called legendary at this point, although all deserve that title.

First up, Paul Newman and lessons learned. I knew of Paul Newman as more than an actor and a philanthropist. Newman was a man’s man, practical joker and above all, a man who deeply loved sports car racing. In my short time with him, I found out this last bit of knowledge would be both wonderful and a curse. My wife and I worked for a publisher who had just raised $250,000, for Newman’s children’s foundation, The Hole in the Wall Gang. In a sense, he came to collect the check and had been ill informed of the amount. You could tell by his casualness that he thought it was going to be more like $5,000. The surprise and I would even say, embarrassment, showed in his eyes, as this was also during the recession of the early 90’s. His comment was, “This is a lot of money!” So, Lesson #1 - Do your best with assistant!  His assistant was one who felt she was important because she was Paul Newman’s assistant and therefore, POWERFUL.  This is something you can run into with assistants that work for celebrities. The result being, unless you are a celebrity of equal amounts to their employer’s celebrity, you may be treated as no one. She was not easy to work with (making everyone do hoop jumping), and this time I would say it got her in trouble.

We spent a considerable time with Paul. Lesson #2 - He wanted to be called Paul, so establish up front how someone wishes to be addressed, but most (not all) celebrities I’ve met like things on a first name basis. You have to be comfortable with this, but much more on your toes with the ones that expect you to use titles or Mr. and Mrs.  So then, as my boss and wife chatted with Paul and our time with him was coming to an end, the racing enthusiast in me  couldn’t help but mention the recent near miss at that year’s Indianapolis 500 victory, for Michael Andretti, the driver of his race team.  His face lit up with happiness, man was that a car race, while slapping his leg and looking straight into my eyes. I had just said to him, “Paul, sorry Michael got robbed at Indy this year”. This after leading almost the whole race, Michael’s car ran out of fuel in the final handful of laps. An instant connection was made, and it went on from there. He found the one guy in the room that shared his passion. Lesson #3 - My boss, out of the loop of car racing, instantly became unimportant at that point and felt it. In my enthusiasm, I made the celebrity very happy and comfortable, and the person who wrote my paycheck, mad at me. The moral to this story is - before Paul Newman arrived, my boss, the owner of a very prestigious company, was the celebrity. Celebrity can be like carrying a dozen eggs. Anyone one of them can crack. 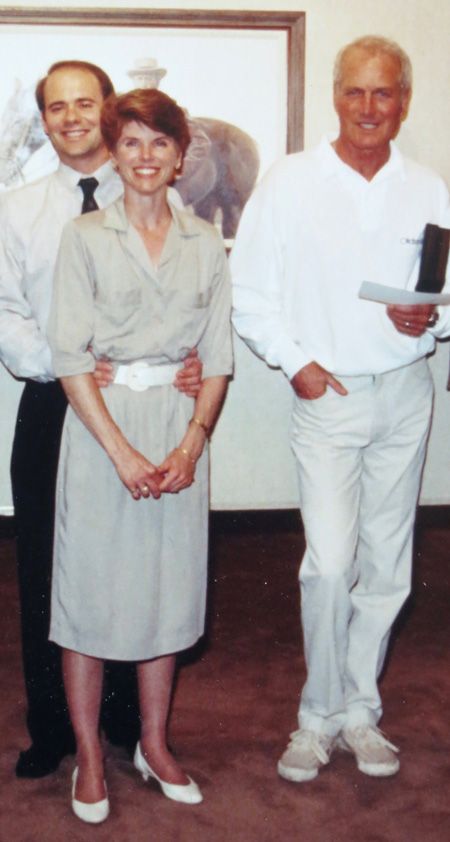 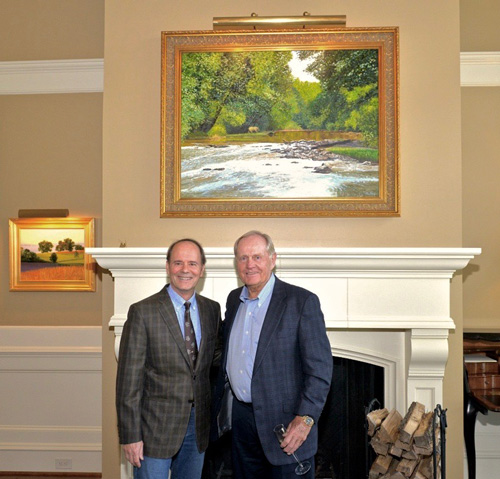 Next up is golf “Legend” Jack Nicklaus. Don’t think for a moment that the most famous, winningest golfer of all time is only known by golfers. The Golden Bear as he is known, and his wonderful wife Barbara, are world renowned beyond the sport, and I have had the pleasure of working with Jack and Barbara over several years now. The couple circumvents the globe annually, both in the name of golf and in charity through their Nicklaus Children’s Health Care Foundation.  Which brings me to Lesson #4 - Celebrities have causes they deeply care about and it is often how your paths will cross. Do not think as an artist, that your promotional endeavors can’t be inline with their philanthropic ones. Many companies and products are promoted in the name of a good cause and fund raising. My art has raised tens of thousands for their (and this) worthy cause in helping children. The Nicklaus’ have been not only very kind in return, but sincerely appreciative, and our relationship is one of friendship and mutual respect.

Last, but as they say, certainly not last, is renowned chef Patrick O’Connell, owner of The Inn at Little Washington. O’Connell, his Inn and restaurant, are easily one of the most awarded in the world. He has easily quintessentially delivered on the theory - “Build it and they will come!”  His personality and creative taste are demanding to say the least. Patrick (as I call him), or (Chef) as he is called by every dedicated employee, is a person of expectation. Can’t is not one of those words he likes hearing. He is as detail oriented a person as you will ever meet. He knows his customers wishes very, very, well. He is a person who creates experiences, not just meals or overnight stays. 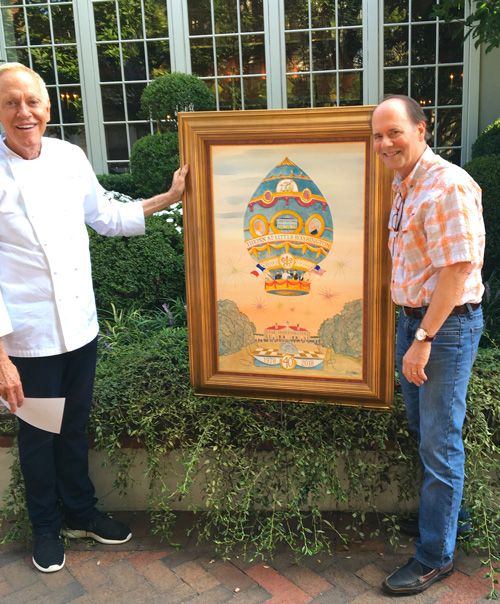 Which brings me to Lesson #5. While not always the case, much celebrity is well earned!! When you are in the company of people who have reached a certain status, they have done so for being way above average and they can teach you things. Your goal is to find a mutual respect, but also in the process to enjoy and learn from your time together.  I have collaborated with Patrick O’Connell and many projects over a long period of time. We share a mutual respect for each other. But trust me when I say, I learn something from him every time we work together. I in turn offer my pearls of wisdom, but whether he enjoys that or not, I thoroughly enjoy learning from him.

I must say in light of O’Connell, a good Lesson #6 - remember the planets rotate around the sun, and the celebrity is the sun. Just as when working with all of your clients, working with celebrities is offering wishes. What they wish for is what they really want and it is your job to fulfill their wishes, not question it.  That is not to say there can’t be levels of realistic compromise. But in working together, if your results don’t meet their expectations, and altering those results can bring their wishes to full expectation or even surpass it. DO IT!  Trust me, winning is not whining. Rise to the occasion. Their vision may be out of reach possibly out of your current view, but let them show you the way. 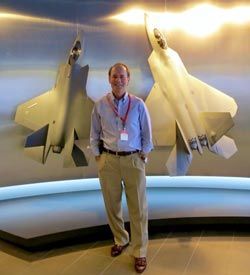 More on working with celebrities:

Being Commissioned is Providing a Service
Read more