In today’s world of painters, certainly tools are an important part of the job. We can also look at tools as technology. Now many artists, especially those that deem themselves as purists, hate the word technology. They think of its use as cheating. Yet many wouldn’t think it was wrong to use a ruler to make a straight line, and whether you like it or not, a ruler is absolutely a simple form of technology. So is a pen, pencil and easer for that matter. They, like most technology, all use science and invention to make a task easier, or more efficient and often more precise.

The purist sees themselves as working like the old masters. Let me share, emulate them as much as you wish, but the words starving artist came as much from a lack of food in those old days as anything, and most purists are not going without food, or dying from infection, or not using their car to get around.

I make these statements because I also have stated that if the camera was readily available in those days of old, every master we know today would have owned one back then. As such, they would have also likely used photos. That’s not to say none would have painted en plein air. But in making an additional point, most of the true credit to even being able to paint outside must be given to John Goffe Rand’s 1841 invention of the tube for paint. With this technology came the ease to carry and preserve paint, along with a growing palette of colors. Heck, the French easel was an invention (technology) which is also given much of the credit.

That brings us to the technology of optics, which has also been used to create paintings for a few centuries. Names like Vermeer and da Vinci were known users of early optics. I think you could bank on the fact that going back in time and handing these two a camera, would have made them very excited. So much so they would want to call all of their friends, and showing them a phone to do so, would have sent them through the roof! But showing them a camera inside of a phone, might just have been too much for them to bear. Call it master’s overload.

Which brings me to the topic at hand, working from photos. Hopefully the above four paragraphs will show that technology can be found in all of our tools of trade, and which of those tools you chose to use is up to you. The important part is knowing how to use them, to be in control of the technology and not controlled by it.

Here goes. Before you use photography as a tool of both ease and accuracy, you have to know something about optical properties. That is, what resembles our normal vision and what distorts or alters it. Now I could make this blog post a book in length with this one thing, but I’ll resist by saying, don’t just read more about this, experiment and learn. You’ll read in places, that a 50mm lens is normal, but it’s more complicated than that. The most important thing to learn though, is that some focal lengths do distort reality, and if you paint from one of those photos without realigning reality, you have failed … if reality is what you are trying to achieve. 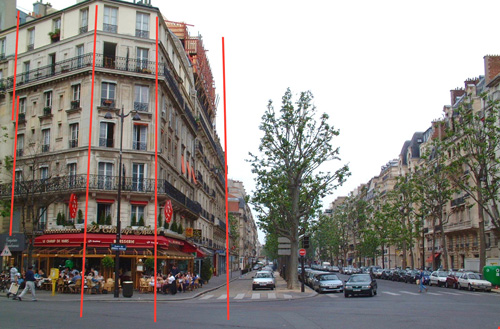 Note, the red lines I've placed on this corner building in Paris, tilt in at the top. It's quite noticable along the left edge of the photo which is of course, straight. Even the buildings across the street lean in. This is cuased by the lens, as if you were seeing it in person, this would not be the case.

Ways this will show up in photos can be altered perspective, straight lines which become curved, or tilted, due to the aspherical properties of the lens. Things which do defy physics. You can’t just use a photo, you have to use your mind and your artist training. In other words, the photo is there to assist, not to completely trust. If you trust a wooden ruler as always making a straight line, you may have a bunch of warped straight lines. 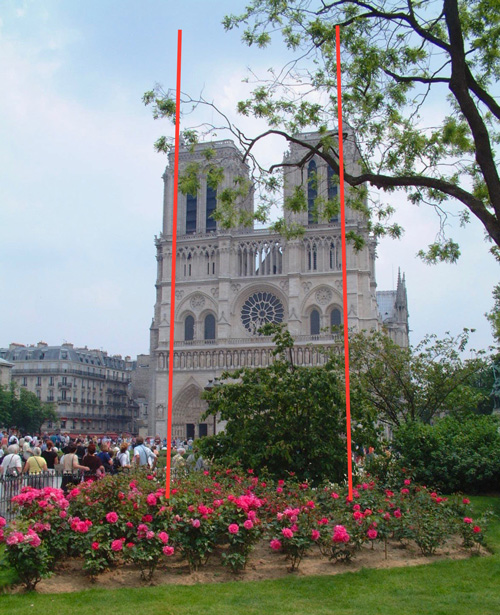 Wide angle lenses are certainly a problem and fish eye type focal lenses way worse. Buildings shot without special tilt lenses will almost always become narrow and tilt in at the top, and I see these mistakes painted all of the time in paintings where photos are used and where basic photography knowledge was not. Also, photos shot at an angle to a flat plane, rather than straight on, also bring out the gremlins. 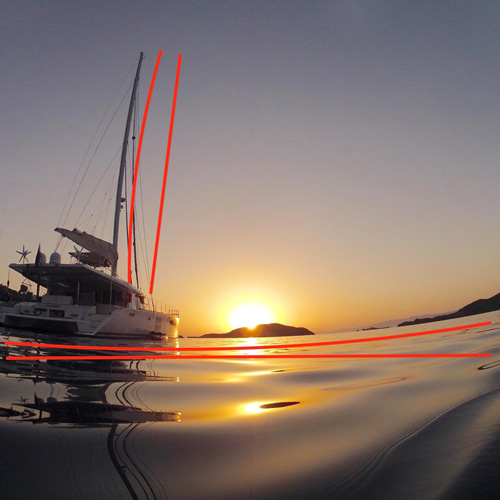 This photo shows how warp happens with wide angle lens. Note my red lines, both curved as the photo is, and straight as real life should be.

The moral to this story is actually, master the tool and technology if you want it to truly work for you. In other words, every painter who uses photographs, should also be a photographer. That doesn’t mean the photo has to be your prime result, but if it is to help your goals in painting, its result is of prime importance.

In this light, is also proper exposure, or lack thereof it. If you simply take a photo, and do not yourself, even study your subject with your naked eye, both the light, the light source and direction, you are putting yourself in debt to the technology and not in partnership with it. 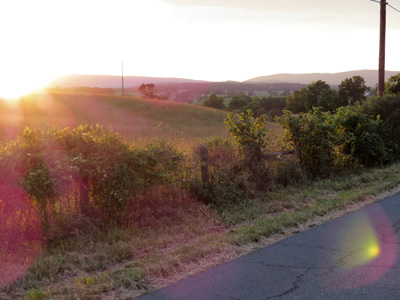 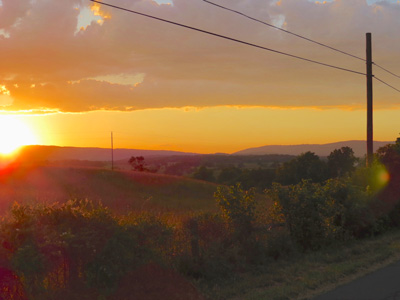 These two photos of the same view were taken just seconds apart. Left, I pointed the camera down, so the light meter more properly exposed the ground, but washed out the sky. Right, I pointed it up to meter the sky, but of course look how dark the foreground became. Both shots are good to have.

Advice - See, no witness, what you are about to photograph. Understand photography. Don’t take snap shots, take photos. Don’t just take one photo, shoot several individual ones of your subject. Think references! With the ease of digital photography, compare your photos while on site to the real thing. Back those photos up with on site notes or studies. When you get home, examine them soon, to remind yourself of the experience, and look closer for problems.

More on Photography by Tom Neel